Judtho is a far more attacking game than chess. The essential points of strategy are to create a strong defence for one's King and to gain material and positional advantages over your opponent(s).

Let's start with creating a strong defence for the King. The foundation of this is the Pawn Structure that you choose. There are two main ways of classifying Pawn Structures:
Let's consider Undoubled Connected Pawn Structures first: 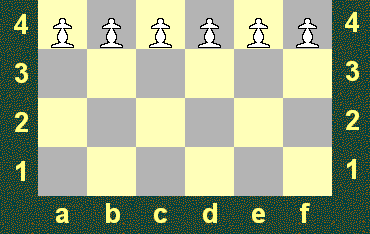 This is an example of a Pawn Wall, which is defined as all six pawns occupying a single rank. This structure will be familiar to chess players. Indeed, it forms part of the Court Assembly, which is the standard Assembly which most resembles the setup of a game of chess. This is shown below: 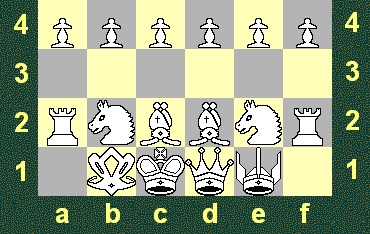 However this is not considered to be a particularly good Assembly for Judtho. The Pawns impede the most powerful pieces (the Prince is particularly hemmed in and the Knights also cannot move into Neutral Territory immediately). Also, once the pieces have moved out, the Pawn structure does not provide much protection for the King.

A better Pawn structure would be an Ascending Steps structure which would provide protection for the King in the bottom right corner of the board (squares c1 to f1, e2 and f2): 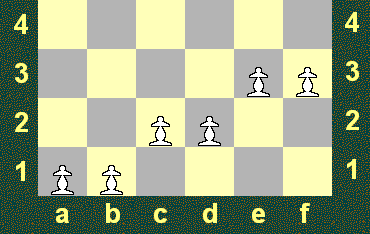 A Descending Steps structure is shown below: 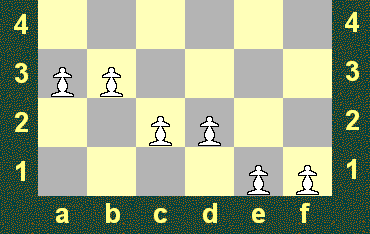 A Mountain structure provides central protection for the King: 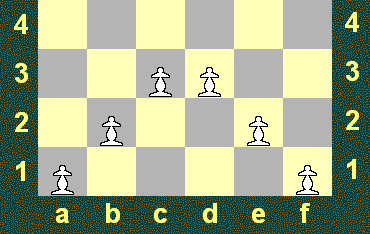 A Valley structure is considered a particularly good Pawn structure as it allows a player to choose whether to shelter the King on the left or the right: 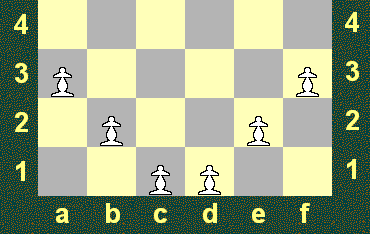 The Valley structure also allows the central Pawns to be very strongly defended. In the diagram below, the Pawns on c1 and d1 are protected by both Bishops and both Knights and are potentially protected by the Rooks as well; the Princess protects the d1 Pawns. The King could be placed in either the left or right corners to complete the Assembly: 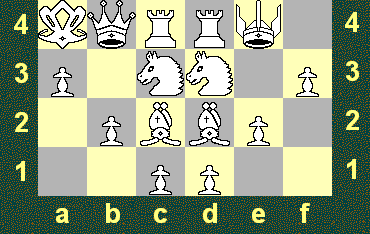 Swapping the Bishops with the Pawns on b2 and e2 gives the Assembly below (the King has been placed on b2): 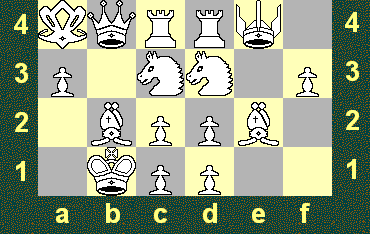 The Assembly above is an example of a Doubled Unconnected Pawn structure as the Pawns on the c and d files are Doubled and the Pawns on the a and f files are not connected to any other Pawns. This Assembly is also remarkable because the pieces cover all 48 squares of the first 8 ranks of the board (ranks 5 to 8 are not shown).